AccountableAnonymity
Yes, we can have both.

It seems like a tall order -- but in fact we can we have both. It's quite simple, if we look at how this seemingly difficult goal is achieved all the time in the world outside the Internet.

Imagine that you, the CEO of a public company, are to meet with the management of a firm you're about to acquire. You've chosen an obscure restaurant in an undistinguished part of town, because you know that if word of the meeting got out to analysts and journalists and investors, you might be accused of deliberately leaking the news to your friends. That could mean big trouble. As a matter of diligence, not deception, you need to cover your tracks.

But there's still a problem: many of those analysts and journalists and investors will recognize your bright red Ferrari. So you rent a gray Chevy Malibu for the occasion.

Who has the right to know?

Now if those analysts and journalists and investors were to ask the car rental agency "Last Tuesday, to whom did you rent the Chevy with such and such a license plate number?" they would appropriately be told that it's none of their business. The car rental company is legally obligated to protect its customers' privacy.

If on the other hand a securities investigator from the Justice Department presented a court order asking that same question, the rental car company would readily disclose the information because that would also be its legal obligation.

The lesson of the license plate

The way we handle disclosure in the realm of cars and drivers and roadways instructs our search for anonymity with accountability. A car's registration number is on display for all the public to see. But we cannot know the identity of the person to whom it is registered unless we produce a right to know and a need to know, as for example if the car was involved in an accident that affects us.

That system has flaws, of course. Motor vehicle administrators often have difficulty complying with privacy standards even in jurisdictions that have them (not all do.) When they get a call from a "police officer" asking for the identity of the owner of a vehicle, the caller may really be a jealous lover impersonating a law officer. Due process can be difficult to observe on the phone.

Online, however, we can use the tools of the Authenticity Infrastructure to ensure that due process is observed, that anonymity is available, that privacy is protected - and yet society still has the benefit of individual accountability. 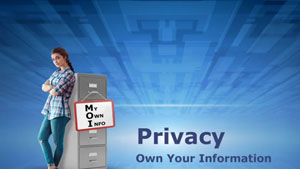 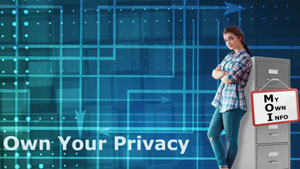 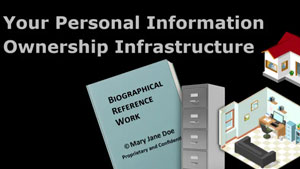 In the online world we are faced with a real conundrum: we are all victims of an epidemic of theft of personal information. The sites we visit, the purchases we make, the searches we perform, all leave a trail that is used by the cookie clubs to produce extremely detailed pictures of ourselves, our political inclinations, our habits, schedules, money... just everything. This information is then used for the same purpose as stage magicians have done for centuries: to manipulate our perceptions.

It's true, laws have not caught up with this form of theft of personal property. But then, what laws, what legal jurisdiction, is up to the job anyway? Bits on the Internet know nothing about national boundaries.

The situation is bad. Our personal property - information about ourselves - is stolen in plain daylight by cookie clubs whose members are "reputable" companies and governments.

But what if absolute anonymity were always available to anyone in any circumstance? What if a group of terrorists were seen to be planning the importation of nuclear or biological weapons. Who among us would say that no trail of information involving the plot should be available to any investigator, any court of law, as the suspects' privacy is our overriding concern?

Just as the manager of the car rental office or the DMV administrator must determine when due process calls for disclosure and when it does not, The Authenticity Infrastructure is designed to provide the tools necessary so that the determination may be made quickly and accurately.

In the Authenticity Infrastructure, the determination is governed by due process as implemented by duly constituted public authority. The jurisdiction is worldwide: a world city hall if you will. Like any city, our City of Osmio is not "owned" in the sense that a corporation is owned, but rather it is owned by its citizens. Take a moment to check out the Authenticity Infrastructure and its capital city of Osmio, and consider participating in its governance.

What The Authenticity Infrastructure Means to you

If you detest the practice of theft of your personal information by the prevalent and improper use of tracking cookies, cookie sharing, view tracking and other means, you have a lot of company. Invasion of your privacy is rampant. Privacy statements are widely ignored in practice.

There's a natural tension between your need for privacy and the authorities' need to be able to track suspects. An engineer would consider this an occasion for optimization, that is, designing a solution that does as much as possible to meet two conflicting goals.

One of the biggest threats to privacy has nothing to do with the content of your messages and files but rather with your habits. While we need a reliable identity credential from which we can control the use of information about ourselves, just the act of using an online identity creates a trail of online footprints showing where you've been. That trail of online footprints is prized by marketers, governments, political parties and others who want to know, without your consent, where you've been, what you've been shopping for, what ideas you've been exposed to, what ideologies are represented by the sites you regularly visit. Whether the snoops are commercial, noncommercial or governmental, they all value your trail of footprints for the same reasons: to anticipate what you will do next, to manipulate your perceptions, and to attempt to influence your actions.

The RentalCredential breaks up your trail of footprints so that it conveys no meaningful information. As with a rental car, you use it for a limited period of time, then turn it in to be used by someone else. (Technically it is discarded, to avoid sharing of private keys, but you get the idea. The rental car metaphor isn't perfect.) Back in the RentalCredential office there is a secured record of who had which credential at which time in case a court order makes disclosure a legal necessity. As long as you're not doing things that would lead the authorities to seek a court order, what you do on the Internet remains strictly your business. The sites you do business with or simply where you leave comments can rely upon the fact that they're dealing with a real person, while at the same time you leave the cookie clubs clueless about your whereabouts and your habits.

This site doesn't use cookies
unless you ask us to. Cookies help us create a relationship between you and us, if that’s what you want. Otherwise, we will make no record of your visit here. Do you want to grant us a license to place a cookie in your device? Yes, you may place a cookie Not now

As you know, by default This site doesn't use cookies. Thank you for letting us establish a relationship with you. We regard information about you as your personal intellectual property, licensed by you to us. We will treat it with care.

Your visit to our site is like walking into a store or other public accommodation. While a shop owner might like to have information about you, compelling you to disclose it would be unreasonable – a gross invasion of your privacy. We don’t want to do that. If you’d like to establish a relationship with us, we would be pleased – but that's up to you.